David discusses the fallout over the FCC vote to repeal net neutrality, reactions to it, and its implications; Twitter’s new tweetstorm button and how to use it; the rollout of Twitter’s new terms of use designed to crack down on hate speech and harassment; how to persuade people who deny reality; Amal and George Clooney’s Casamigos tequila-branded twin-cancelling headphones; hydroponic farming; Apple’s acquisition of Pop Up Archive’s podcast search engine; Gmail’s newsletter unsubscribe feature; Facebook’s new domain verification requirement for page owners; BuzzSumo’s study of the most-shared articles of 2017; Facebook’s admission that it can make you depressed; …and much, much more. Image courtesy Credo Action.

SUBSCRIBE: iTunes or search Spotify or Google Play or Stitcher or iHeart Radio.

Twitter has formalized a tactic that had long been adopted by political Twitter and other users with the addition of a tweetstorm button.

11 Stories In Which @KarwoskiCourage was quoted in 2017

While we excel at earned media for our clients, we're pretty good at it for ourselves, as well!#PublicRelations#EarnedMedia#CreativePR#PR pic.twitter.com/Snri0XV28d

I'm going to do an experiment here by using Twitter's new #tweetstorm button to string together a series of stories about #SocialMediaMarketing. Let me know what you think: ✔️

#VIkings 7, #Bengals 0
Great first drive!
Sack for minus 9, screen for 20+, long gain on third and 3 from Thielen, Murray for the score!#Skol
#VikingsChat#MINvsCIN

Twitter began enforcing new rules today to suspend users affiliated with hate groups “on and off the platform” — a policy that already has led to the disabling of some alt-right accounts.

How To Persuade Flat-Earthers

With some psychological insight and a few communications tactics, you just may be able to turn around that family member or colleague who refuses to accept reality.

George Clooney and his wife Amal recently handed out Casamigos Tequila-branded noise cancelling headphones to fellow travelers during an international flight to apologize in advance if their twins started crying.

Tokyo Metro Co. is venturing into agriculture by growing salad greens hydroponically beneath its rail lines.

Apple may be looking to bolster its podcast tech. Likely to do with the acquisition, Pop Up Archive closed its Audiosear.ch product in late November.

Gmail’s new feature works via a new “Inbox Tip” card that appears at the top of your inbox in both the Android app and desktop site.

In order to be able to edit links to content you post on your Facebook pages, the company is now requiring that you verify your website’s domain with the page.

…UNLESS you complete this 'Domain Verification' process for your Pages.

BuzzSumo examines two billion articles and Facebook posts to determine what was the most-shared content on that platform during 2017. 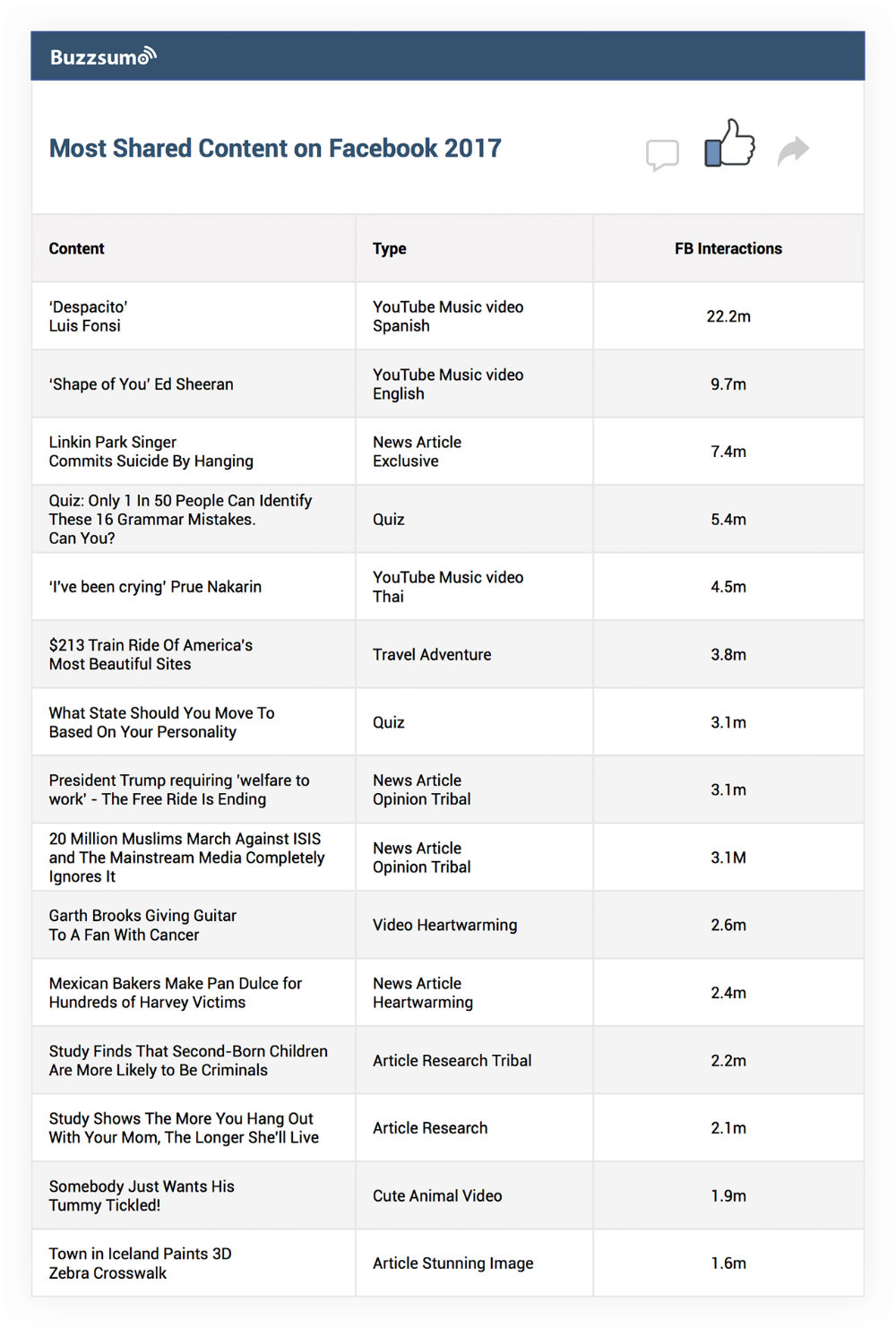 It’s the end of the world as we know it, and Aji Pai feels fiiiiiiiiiine.

We’re disappointed in the decision to gut #NetNeutrality protections that ushered in an unprecedented era of innovation, creativity & civic engagement. This is the beginning of a longer legal battle. Netflix stands w/ innovators, large & small, to oppose this misguided FCC order.

The @FCC's vote to gut #NetNeutrality rules is a body blow to innovation and free expression. We will continue our fight to defend the open Internet and reverse this misguided decision. https://t.co/TXTQWDiBNC

We do support a CRA reversal of today's #FCC action to repeal the #NetNeutrality rule. We're cosponsors: https://t.co/q3VOFDkhGr https://t.co/8oOscTVlab

Quartz’ Mike Murphy represents the traditionalists with a series of eight long tweets.

Twitter is a social network, launched in 2006, that lets its users communicate short messages of 140 characters to each other and the wider web. But over time, messages got longer. First, you could include links and pictures.https://t.co/spuQWNzsxu

Facebook’s director of research David Ginsberg and research scientist Moira Burke published a post in which they addressed questions about the impact Facebook has on our moods, and revealed some compelling information.